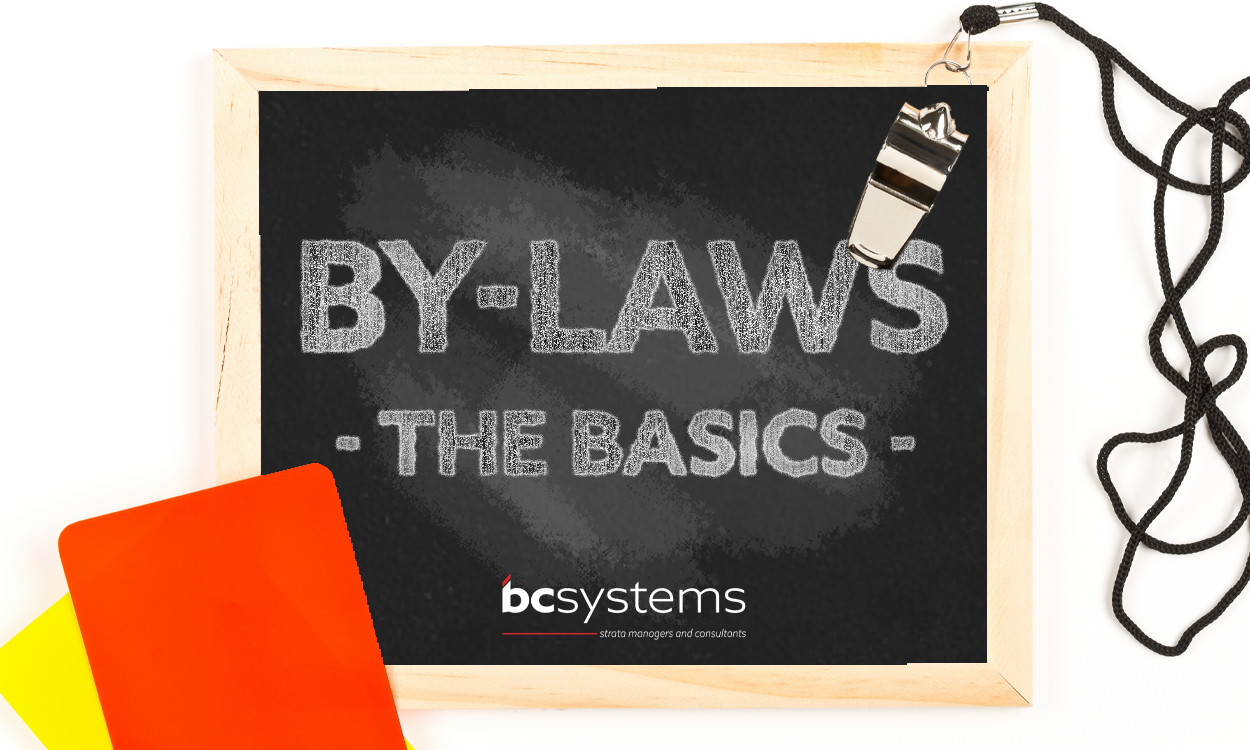 The body corporate is regulated in two main ways:

By-laws regulate what can and cannot happen inside the community titles scheme, and cover a wide range of topics, for example:

What types are there?

By-laws can be broadly classified into two types:

Where do we find them?

By-laws are documented in your community management statement (CMS). The CMS is the master document which includes:

Who do they apply to?

By-laws apply equally to owner-occupiers, tenants, and visitors. Any person coming into the body corporate scheme is subject to the by-laws.

Consider a simple by-law: “The pool must not be used after 10pm”. That by-law controls the use of the pool, and applies equally to owners, tenants, and their visitors.

As by-laws are custom for each body corporate scheme, the language used in the by-laws can differ and may refer to:

Generally, these terms are defined in the by-laws, otherwise they have their normal meaning in the relevant legislation.

Tenants in a body corporate development are occupiers for the purpose of by-law application, whether or not the tenant is named on the lease.

It is a legal requirement for the owner or agent of the lot to give a copy of the body corporate by-laws to the tenant.

In addition to being subject to the body corporate by-laws, tenants in Queensland are automatically required to comply with the by-laws under the terms of the Residential Tenancies Authority (RTA) General Tenancy Agreement.

The RTA General Tenancy Agreement automatically makes it a breach of the tenancy agreement (lease) if the tenant breaches the body corporate by-laws.

Breach of by-laws = breach of lease

It is up to the owner or their agent to ensure that their tenant is complying with the terms of the lease, and this may require that the owner or agent issue the tenant with a tenancy breach notice if the tenant breaches the body corporate by-laws.

An ongoing breach of the body corporate by-laws by the tenant may be grounds for the owner or agent to evict the tenant.

How can they be changed?

By-laws are originally decided by the developer who created your body corporate scheme, but the body corporate has the power to change its own by-laws via a democratic voting process.

The two types of by-laws (discussed earlier) will determine the type of voting required to make any changes to the by-laws.

The process to change exclusive use by-laws is similar to normal by-laws, however:

AGM or EGM motions can be proposed by owners too, not just by the committee. Owners are invited to submit their own motions each year before the AGM is held.

In many cases a relatively simple edit to an existing by-law to solve a particular problem may cause other unintended knock-on effects.

Given the complexity of by-laws, it is generally best for the committee to take a unified approach to any revisions and with the assistance of BCsystems and a body corporate lawyer, rather than owners submitting their own motion.

When and why would by-laws be changed?

This depends entirely on your body corporate scheme. Most bodies corporate make some change to their by-laws every few years, generally motivated by:

Sometimes the original by-laws were applied by the developer or their solicitor without much customisation. For example, we often see by-laws which include standard references to pools and gyms, even in body corporate developments which don’t have those facilities.

If a by-law has no relevance to your body corporate development, it can usually be removed using the approval process described above.

How are by-laws supervised and enforced?

If your body corporate has a caretaking service contractor (on-site manager), it is generally a duty of the caretaker to take initial by-law monitoring and notification steps including:

If the steps above are carried out by the caretaker and the by-law issue continues, then the matter should be escalated to the committee, generally in a monthly report unless the matter is urgent.

The committee holds the formal by-law enforcement power which includes:

These formal steps can only be authorised by the committee.